Sanctioned tournaments will make use of scorecards to track several stats. Each game will have one scorecard to be used by both teams. The expectation is that the player from the starting end will tally the throws for their opponent. Once that team’s turn is over, the roles will switch. This provides several benefits:

*The 2022 PDFA Discflect World Championship will be the first tournament to make use of the new PPR stat. After analyzing data from 2021, the Game Rating stat will be replaced by PPR, which is a much simpler to understand stat and will not hurt teams when Win Shots are thrown.
Scorecard PDF file

How to fill out tournament scorecards 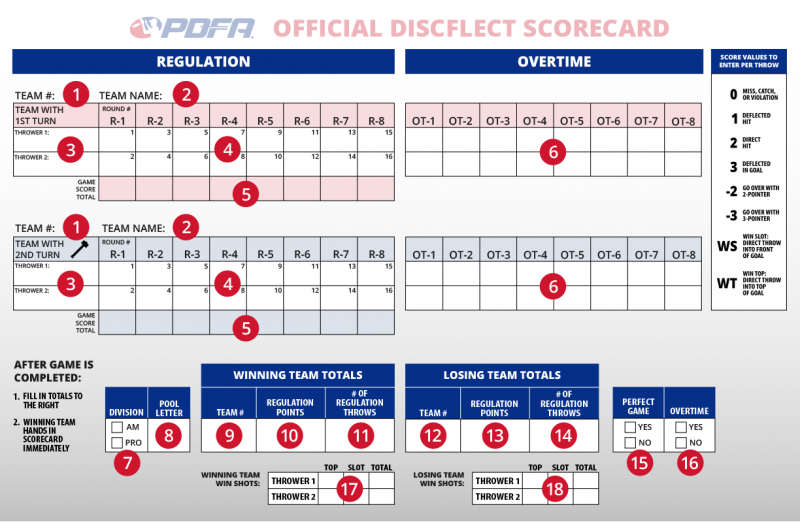 Teams should first determine the Hammer option and who from each team will throw first. The team throwing first will be on the top (light red), and the team with the Hammer (2nd throw) will be on the bottom (light blue). Prior to the start of the game, one player will fill in the following for each team:

After game is completed

One person should enter in the totals at the conclusion of the game. It is important that all of this information is accurate to ensure stats are properly entered. 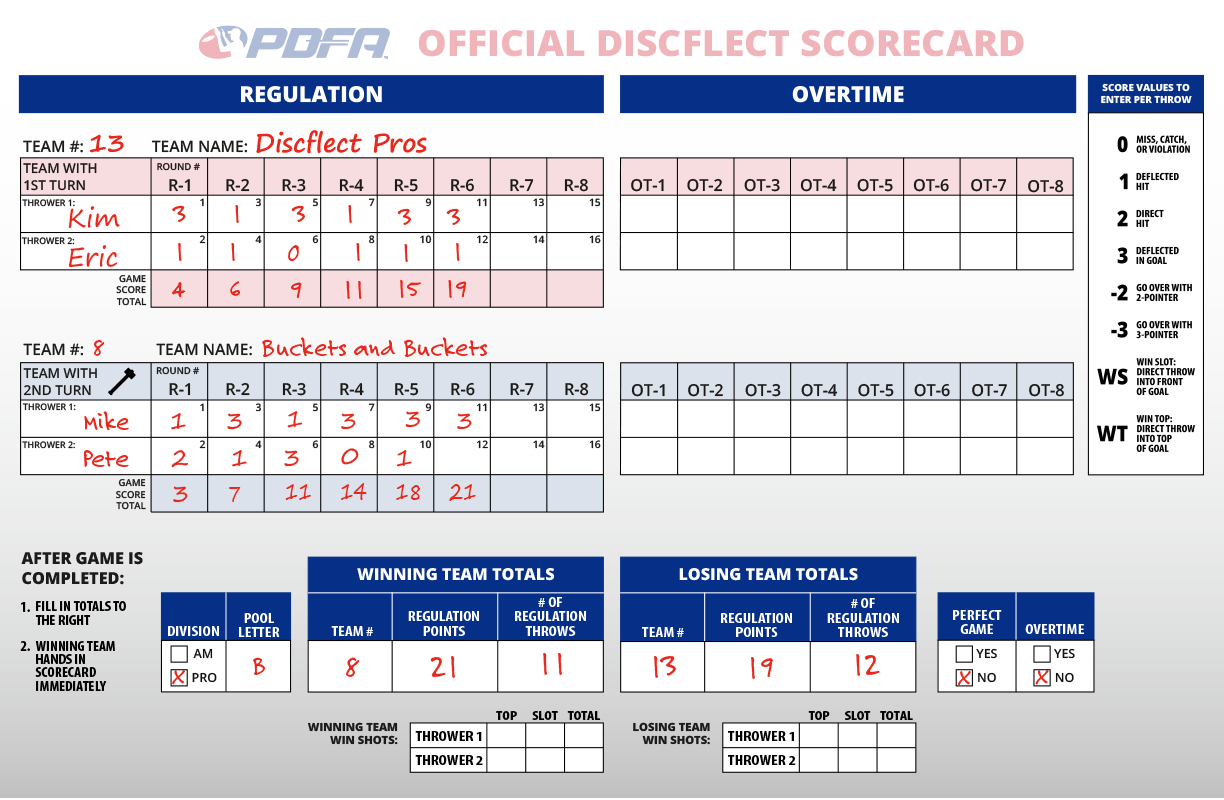 In this example, Team #2 wins the game against Team #5. Both teams got to 21 points in 5 Regulation Rounds, so the game went to overtime. Team #2 won the game in 2 overtime rounds. Also, Team #2 threw all 3-pointers, so they threw a perfect game. 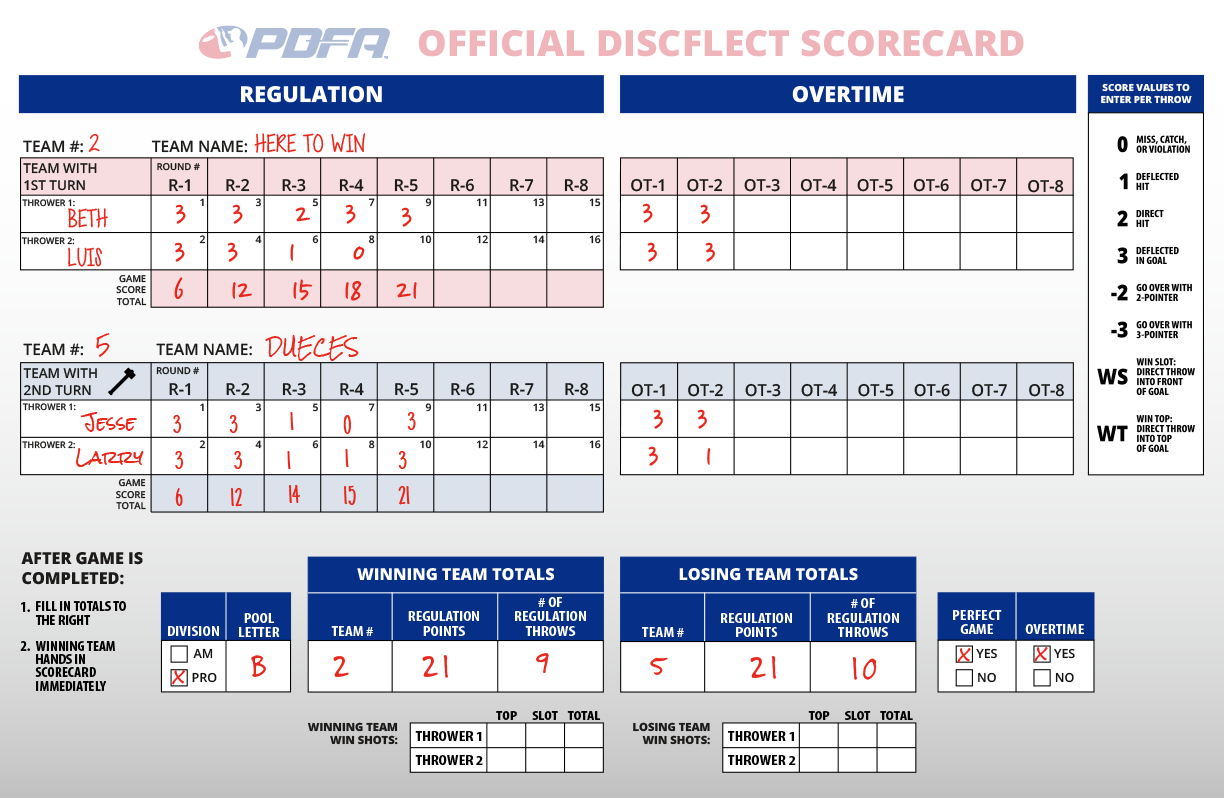 In this example, Team #4 throws a Win Shot (over the top) against Team #10. After Team #10 is unsuccessful on the redemption attempt, Team #4 wins the game. Once a WS is thrown, no more points/throws will be counted for either team that round. Only 4 Regulation throws are counted for each team, as the Win Shot itself does not count as a throw. Also, in this case, the winning team had less Regulation Points than the losing team, but the totals are still marked as such.

Example #4 - Win Shot Redemption
In this rare example, Team #8 throws a Win Shot. Since Team #18 has The Hammer, they have two throws at redemption. These attempts do not count towards points or throws. In this case, Team #18 throws a Win Shot as well to send the game directly to overtime. The same rule applies for overtime, but only the team with The Hammer gets redemption. If the team throwing first doesn’t throw a Win Shot and The Hammer team does, the game is over and The Hammer team wins immediately. 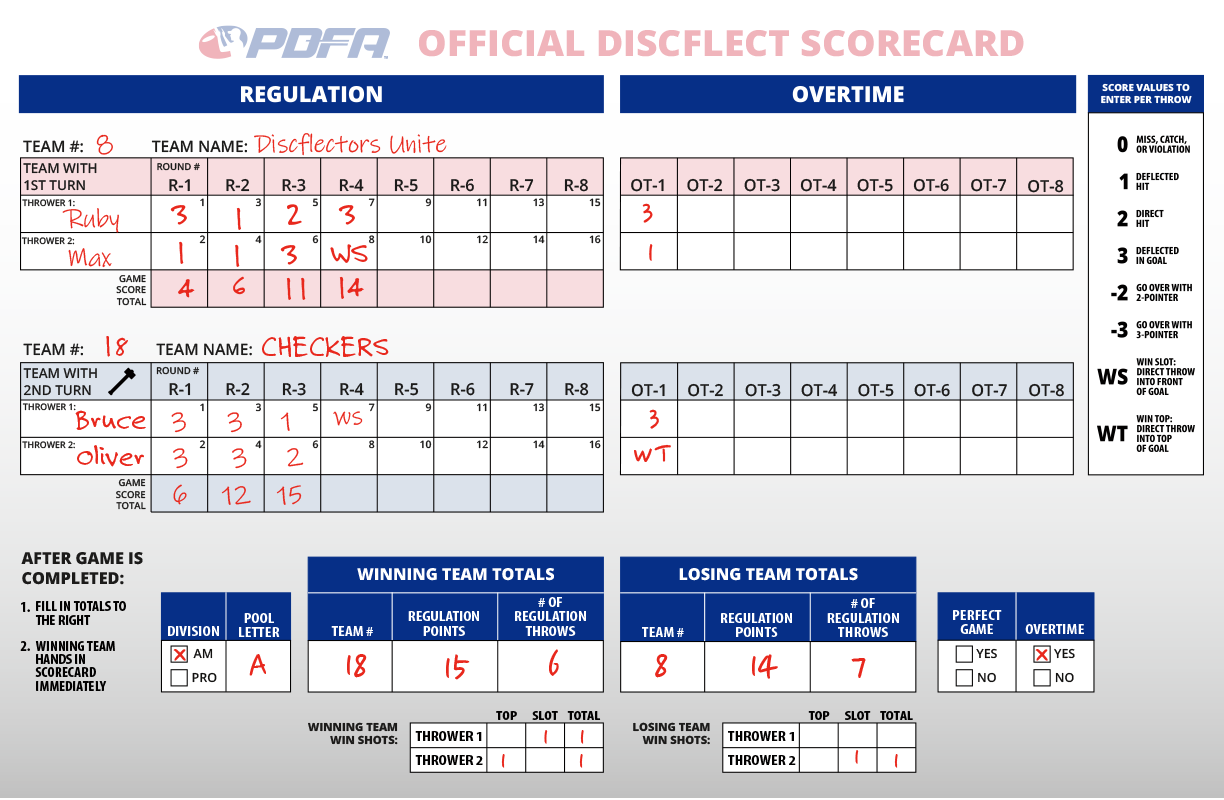